What Was the FAB (Feline Advisory Bureau) Cattery Listing Scheme ?

What Was the FAB (Feline Advisory Bureau) Cattery Listing Scheme ?

The Feline Advisory Bureau (now known as the International Cat Care) was setup in 1958 by a “group of very passionate cat lovers who decided to do something about the dismal lack of information about cat health and welfare.”

This statement pretty much captures the aim of the FAB and from 1958 they set about campaigning for improved cat welfare by educating cat owners, vets, rescue charities and commercial boarding catteries on best practice.

For many years an FAB Listed Cattery was seen as the sign of a good, well run cattery and cat owners would often seek out catteries that had been approved by the FAB. Any cattery owner could apply for a listing but would need to ensure that their cattery met the minimum standards and they would be required to pay a yearly fee amounting to c. £100. Over the years, as the Feline Advisory Bureau developed and grew they began extending their knowledge and education, on cat welfare, throughout the world and as such, re-branded themselves as International Cat Care, in 2010. Part of this re-branding of the FAB involved developing and strengthening certain areas and has allowed them to approach cat welfare concerns holistically and reach more people. Inevitably this meant that other areas were adversely affected. One of those affected was the FAB Cattery Listing Scheme. It was concluded that the Listing Scheme was very labour intensive and that the costs involved in running the scheme would be better spent in other areas. This is what they said on their site regarding the closure of the scheme: International Cat Care – Closure of the FAB Listing Scheme:

“At the FAB* AGM on 16th October 2010, the Chairman announced that the charity trustee directors had made a strategic decision to close the Boarding Cattery Listing Scheme….The Listing Scheme has been labour intensive and the charity has been funding it for many years. More sophisticated accounting mechanisms have enabled the charity to look at apportioning costs in a much more realistic way. “

“The List of catteries will continue on the website until 2014 although any current listed catteries that change hands will be removed as there will be no future inspections. However, those who are listed are now self-certified. We still encourage cattery clients to send in their feedback.”

So where does that leave everyone now ?

Well, those that have already been listed still retain a listing on the International Cat Care website, but are now listed as self-certified.

Can a newly built cattery be listed ?

No. As the listing scheme ceased in 2010 there have been no new listings.

Is there any value attached in seeking out an FAB listed cattery ?

Yes and no. By seeking out a cattery that is listed as an ‘FAB listed cattery’ you will be boarding your cat at a cattery that was historically granted a listing by the former FAB. However, as the scheme is no longer supported there will be no guarantee that the cattery still adheres to the same standards for which it was originally listed. This is because no-one from the International Cat Care (formerly the FAB) now inspects and checks catteries for this purpose.

What are the alternatives ?

As it stands there is currently no independent accreditation or standard by which commercial boarding catteries are inspected or judged.

Shortly after the FAB closed the listing scheme, iPAWS (which stands for Independent Pet Accommodation Welfare Standard) was being developed in the hope of providing the UK‘s first ever national register of licensed catteries and kennels with information on whether they failed, met or exceeded the UK‘s minimum standards. The scheme was developed by Kay Key of Essential Cattery Design and had the backing of a lot of high profile figures in Cat Welfare, such as Cat Behaviourist Vicky Halls, Dog Behaviourist Gwen Bailey, The Dogs Trust and David Key (to name a few). Unfortunately the scheme was short lived and didn’t get the financial backing and support it deserved. It was certainly the most progressive attempt by an independent body to raise welfare standards for boarding catteries and kennels that has been known to date.

As a legal requirement every new cattery must obtain a licence from their local authority. This has been the case for a number of years and the minimum requirements are set by each individual local authority. The minimum standards that local authorities work within are set out in a document called the CIEH Model Licence Conditions for Boarding Catteries. This was a document that was originally written in 1995 (for which we, Pedigree Pens Ltd. were original sponsors). The guidelines were re-written in 2013 and now form the most up-to-date set of minimum requirements for establishing and running a boarding cattery. As each cattery has to renew its licence on a yearly basis this should ensure that minimum standards are met year on year.

So what should i check for when looking for a good boarding cattery ?

Firstly you should check that the cattery is properly licensed by their local authority licensing officer and i would recommend that you do your own thorough research by visiting and inspecting the accommodation at any cattery you are thinking of using. To help you choose a good cattery we have provided a guide and checklist here: Choosing a Good Cattery… and Checklist

All of our catteries are built to meet or exceed the minimum standards set out in the CIEH Model Licence Conditions. You can find your nearest Pedigree Pens cattery by searching our Cattery Directory Site. 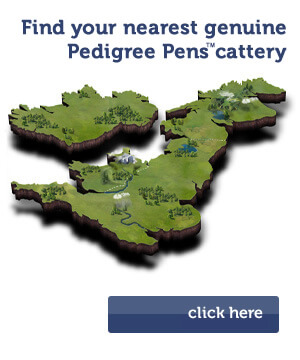 Pedigree Pens (FirmFix) were one of the original sponsors of the CIEH Model Licence Committee in 1995.

These guidelines have been in place since 1995 and provide the backbone of the recently updated guidance from DEFRA, which came into effect on 1st October, 2018

You can read more and download a copy of the new guidance here.

We use cookies to ensure that we give you the best experience on our website. If you continue to use this site we will assume that you are happy with it.Ok